To Compete or Non-Compete – That Is the Question

Employees are increasingly reluctant to sign non-compete agreements. Is this hesitation earned or overblown? 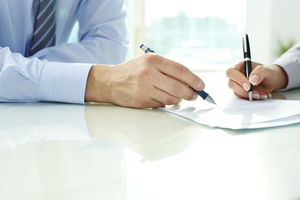 Non-compete agreements were once mostly for executives in industries big on trade secrets and human capital investment. But now, they’ve become a concern for a wider variety of workers.

“We are in a decade of a definite rise in non-competes and the requirements by employers of employees to sign them in all industries, in all positions,” says Orly Lobel, a professor of employment and labor law at the University of San Diego and the author of “Talent Wants to Be Free” (Yale University Press, 2013). “There’s also a rise in non-compete litigation.”

Non-compete agreements restrict employees from working for a competitor or in an industry after employment termination, typically with terms defining a specific geographic limit and a time period that can range from months to years. In many cases, employees feel blindsided when asked to sign these covenants. A 2011 study by MIT associate professor Matt Marx looked at more than 1,000 engineers who signed non-compete agreements. Seventy percent of those engineers were told they would have to sign these agreements after they’d already accepted the job offer – and half after they showed up for work.

But the impact of signing the agreements on workers in the study who later switched jobs was in some cases significant. One-third of the engineers who changed jobs left their industry altogether, often taking pay cuts, to comply with the agreements.

The simple act of signing a non-compete can alter employee behavior, whether the agreement is enforceable or not. “There’s a lot of evidence that engineers and other workers signed on a non-compete will decide to forgo other job opportunities and just stay in a place where they’re not as happy,” Lobel says.

According to Lobel, these workers, when they switch jobs, are also more likely to go to a big company that promises to indemnify them in case of litigation. “Whereas if they start their own business, they’re really exposed to that litigation threat,” Lobel says.

But while the influence of non-competes on employee behavior is often very real, their validity in many cases isn’t. “The majority of non-competes that are presented to employees are legally unenforceable. That’s the most important thing that people should know,” says Alan Hyde, a professor of law at Rutgers University who writes and lectures frequently on issues involving employee mobility.

But even if a non-compete is unenforceable, an employer can still punish you for not signing one. “If you say, ‘I’m not signing that,’ the employer is normally free to give the job to someone who will,” Hyde says. “So most of the time, the best path for the employee is to sign it, cross your fingers and hope for the best, unfortunately.”

Which agreements are enforceable? This can vary greatly by jurisdiction. Non-competes are void in California and significantly restricted in Colorado, North Dakota and Oregon. States like Massachusetts, New York and Michigan are known for stricter enforcement.

In many states, the picture is murky because non-compete agreements are judged based on the vague legal concept of reasonableness, and subject to judge-made interpretations of this reasonableness test.

Nevertheless, some rules of thumb generally apply. “To enforce a non-compete, the employer first has to show a legitimate interest, and it’s almost always a trade secret,” Hyde says. For this reason, non-competes for low-skill, low-wage positions – like those Jimmy John’s has recently received criticism for – are among the most unenforceable.

Likewise, a non-compete is a legal threat for any worker only if the employer will actually sue to enforce it. “Most of these agreements are just there to terrorize employees,” Hyde says. “Most employers don’t sue on non-competes.”

You can find out if you’re about to join a company that may sue by talking with current and former employees, and through basic Internet research. “A company that cultivates an image of one that sues departing employees doesn’t keep that a secret,” Hyde says.

The workers who need to tread most carefully in considering these covenants are those with dreams of entrepreneurship and those in high-skill positions in fast-changing industries. And more evidence is now showing that these workers are starting to re-evaluate where to live and work based on these concerns.

Lobel cites one study that showed that scientists from Michigan moved to California in high rates after Michigan started enforcing non-competes. “You see this even more with the people who are star inventors – they move in even higher rates,” Lobel says. “If you feel like you’re really valuable, you want to be in a place where there’s active competition over you.”

As a result, the jurisdictions these workers are moving to may also be benefiting from more startup activity and job creation. “Now there’s fairly clear economic research that non-competes hurt society,” Hyde says. “There’s no social advantage to letting employers inscribe non-competes. All the advantages lie in jurisdictions like California that don’t enforce them at all.”